Covid-19 Elective Guidance Issue 5: The Good the Bad and the Ugly

Are you ready to resume elective services?

At local and regional levels some elective services have restarted.

Pressure is intensifying on systems and hospitals to speed up getting their services running again, with concern about cancer patients in particular. The BBC claimed that an extra 35,000 deaths from cancer could occur if services are not resumed. The HSJ reported that NHSE would “reintroduce performance measures”. Furthermore, that Trusts were now expected to “send patient tracking lists to NHSE” each week.

On the face of it, this looks positive. But delve deeper and you quickly realise some pretty big flaws. Firstly, sending unvalidated data often causes more confusion in the system. Decisions taken based on incorrect numbers are highly likely to be incorrect decisions. Secondly, we have noticed an increasing trend of thinking that everyone on an RTT waiting list represents the totality of patients waiting for elective care.

RTT represents an ever-decreasing proportion of the total patients waiting.

When the latest national figures were released, headlines were all about how the longest waiting patients had increased. Patients waiting more than 1 year had increased more than tenfold.

What few people mentioned was that the total RTT waiting list had decreased by over 500,000 patients. Where have they gone? It is a pretty safe assumption that they did not get treated - so where are they?

The answer is that they were removed from the RTT waiting list but have gone onto other lists which are not reported nationally and no-one has oversight of.

A lot of organisations have therefore been asking us what they should be doing now in order to resume elective services safely. How would they know if what they are doing is safe and appropriate?

Over the last 10 years we have worked with over 80 organisations on improving elective services. A key element is analysing the current situation and then sequencing interventions in the right way to improve things.

This involved our “8-box model” approach which covered all aspects of elective services. We have therefore updated our model for the post-Covid environment we find ourselves in. 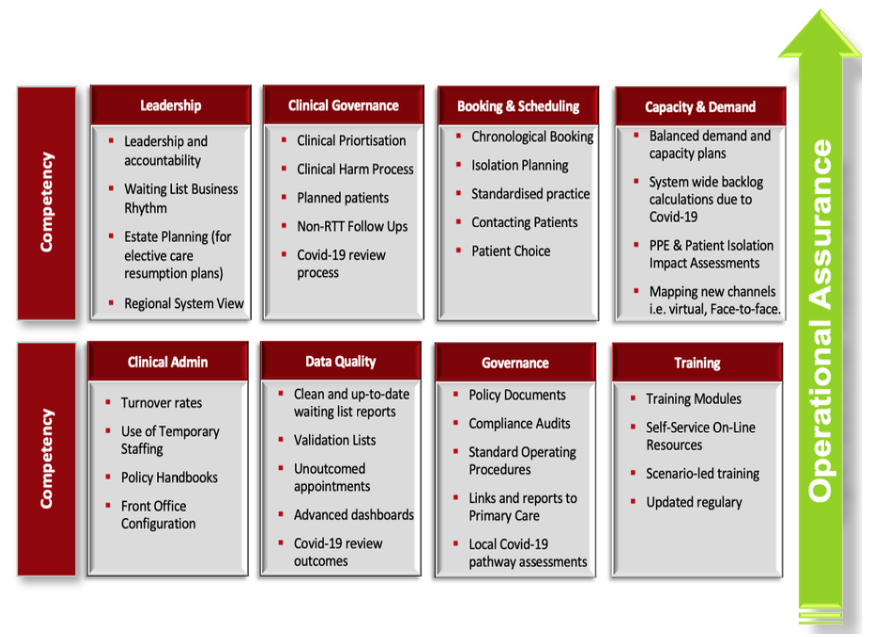 Our diagnostic toolkit can be used locally or regionally to assess the current situation in order to identify the sequence of interventions that are required.

Significant changes have been made to the model to directly address the issues now facing the NHS:

Clinical prioritisation procedures and measures, booking and scheduling changes in procedure around isolation, patient choice – often they don’t want to come to hospital and reduced capacity due to PPE requirements and staff shortages are now major areas of focus.

At both a local and increasingly regional level, estates planning and configuration are proving crucial to resuming services with “clean” areas often being required. These areas can change very quickly depending on the presence of the disease.

Capacity planning has now become an urgent issue that needs to be updated much more regularly than in the past as organisations react to outbreaks, staff being unavailable and patient concerns.

It is in everyone’s interest to get elective services back up and running. Our toolkit gives organisations’ a safe and measurable way to get there.

Below we have listed a minimum elective care dataset that systems should use to monitor and risk stratify its waiting lists.

This list is by no means exhaustive and will need local additions depending on circumstances within each system.

Covid-19 Elective Guidance Issue 5: The Good the Bad and the Ugly